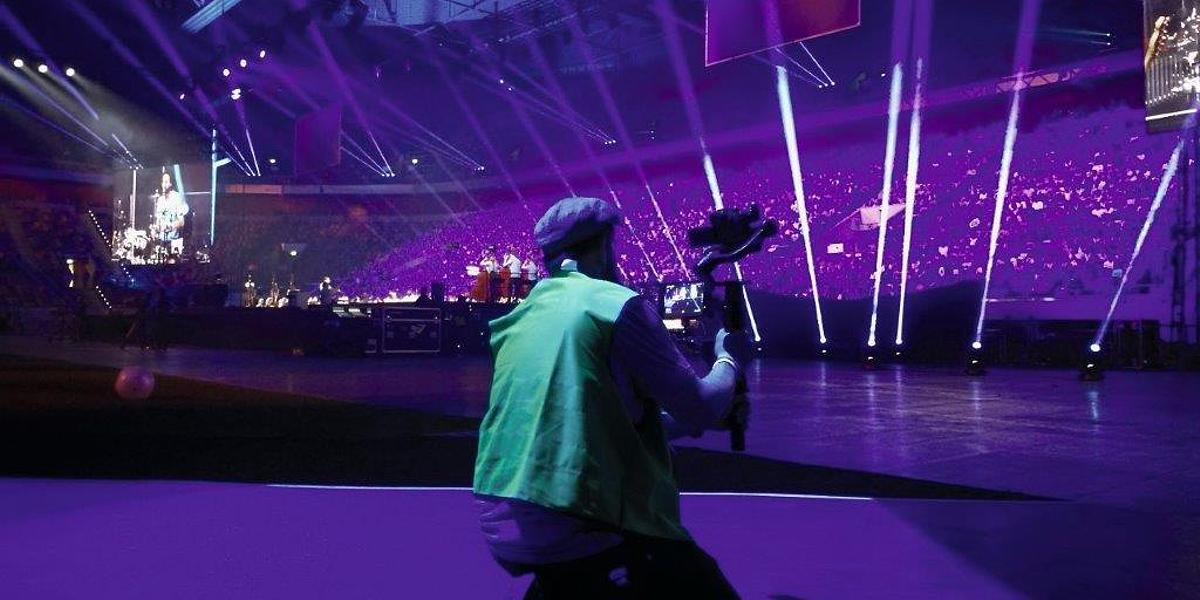 Twenty terabyte of film material
from the International Youth Convention

All the preparations, the anticipation, the expectations and then - it has come to an end, the International Youth Convention 2019 (IYC). To keep the memory alive for a long time, four camera teams were working at the IYC, trying to be everywhere and to capture the IYC feeling.

Suddenly, Maxwell from Zambia is standing in the editing rooms in Hall 6. It is the Wednesday before the International Youth Convention. The authors are sitting together and discuss what to film during the convention. Meanwhile the cameramen are waiting, although they would rather already be outside and working. Sitting here while things are set up outside makes everyone jittery. That is why they are all jumping up immediately when they see Maxwell; and they start filming.

Three camera lenses are first pointed at him, then at the memory card he takes out of his pocket and hands over to Ingo. It is video material from Zambian youth who travelled around 7,500 kilometres to get here. Ingo needs the pictures for the planned IYC Blu-ray.

Ingo Fucking is the manager in the rooms of the film editors, even though you wouldn’t think so from his behaviour - if you ask him about his most important tasks, he says: “entertaining the team”. But there is more to it. His concept is the basis for the film about the International Youth Convention. Already during the IYC, the team delivers clips for the social media channel: Furthermore, an author and a cutter are producing the pictures of the day that are shown on the big screens before the events in the arena.

On Wednesday, 29 May, everyone is getting together: thirteen media representatives (cameramen, cutters, reporters), and little later on, twelve helpers. Now they will see if what Ingo has been preparing for months will actually work. Ten years ago, he and many of the team were already taking part in the European Youth Day. But now, the team is bigger, the equipment is better, the concept is more extensive. When Ingo heard about the IYC 2019, he knew right away: He wants to be there again, “because everyone still associates the European Youth Day with great emotions, so I was looking forward to meeting everyone again - and many people don’t actually look ten years older”, he says and grins.

Maxwell has long gone and Ingo has retreated to his cutting station with the material, when in the afternoon the production schedules for the coming days are finally complete. So off they go. One camera team is taking care of setting things up in Hall 6, another team is going to the arena on the off chance that they might already be able to take a look inside. It’s not easy to find the entrance without the scouts. Via an underground car park - most certainly not the official route - they finally make it and are standing on the grass. The stands are empty, but the stage is full. The orchestra is practising for the pop oratorio. Everything is lit with blue light and beams of white spotlight are crossing each other in the dark. Sometimes, special effects flash up. A dream for the two cameramen. At the moment, they are still free to move around as they please where the Chief Apostle will be pressing the buzzer and open the International Youth Convention in two days - the setting is fantastic.

Out and about with an ambassador

On Thursday, the arrival day, everyone is on their feet. One team welcomes the youth from South Africa at the airport, another team is waiting for the full trains at the train station in Düsseldorf. Another team is filming at the subway station Messehallenright next to the exhibition site. And everywhere young people are cheering into the cameras, waving, singing, shouting “Here I am” - here they all are! These are the images of anticipation Ingo needs for the film.

The teams are accompanying some of the IYC ambassadors for the social media channels of the International Youth Convention. Pascal from the Netherlands has the hardest part: One team wants to spend the first IYC night with him: from the evening programme until bedtime. It starts out harmlessly enough at the open-air stage. But then the reporter decides that karaoke is a vital part of any successful night. Pascal doesn’t agree, but he can be persuaded. You don’t need to be a good singer for karaoke - under normal circumstances. But when they reach the Swiss booth, he sees that it’s different at the IYC. Somehow, everyone standing on the stage can sing. Could they be the participants of Show YOUR Talent who are practising one more time? Or does singing in the congregation choir makes you a good singer? Pascal is squirming, what did he get into now? Together with ambassador Kevin, he finally dares to go up and sings “Hallelujah” by Leonard Cohen. And yes, it’s off-key. But after a rather wobbly start, the audience joins in and even waves their phone lights. Thanks to the support, Pascal finally exits the stage with a smile and embraces Kevin with relief.

Filming is normally forbidden in the sleeping halls, but the official IYC film is an exception. And so Pascal lets the camera team take an exclusive look at his sleeping hall. When he arrives, some youth are already asleep, blankets over their heads to shield themselves from the hall lights. Who knows how many hours they travelled to get here? Asking them is not really an option at the moment. Pascal finds his way through the large number of mattresses surprisingly well and soon encounters his cousin. The two of them are sharing one mattress for the duration of the IYC, as though sleeping in the sleeping hall wasn’t uncomfortable enough.

Around 1.30, Pascal’s and the camera team’s work is finally over.

The days are starting early, ending late and the nights are short. Sometimes there is not enough time to go to the food halls. If that happens, the waffles from the inclusion booth are life-saving. Ingo spends a lot of time in his office. He receives video material from all sides: from the transmissions, the filmed events, from his camera teams and from some helpers whom he had sent out with mini cameras so that he doesn’t miss a single thing. His impression: “The international aspect is brilliant. To see how faith is creating unity. Ten years ago, it was ‘only‘ a European Youth Day. This time you can see that it is a true, genuine World Youth Day.” Apart from the pictures on his screens, he doesn’t really see or hear anything, apart from the drums and the anklung music from the Asian booth whenever someone opens the office door. The editing rooms are directly above the booth where there seems to be something going on from morning to night and from Thursday to Sunday.

Friday is the only day Ingo finishes work early. He snatches up his camera, gathers a few colleagues and heads out himself - “to give his head some rest”. His goal: the party in Hall 5. And then straight into the crowd. Within minutes he is surrounded by dancing people. In front of him South Africans, behind him Argentinians, and Ingo right in the centre, filming and dancing.

It is Saturday night, when it becomes clear that the green route has the potential to become a legend. A long time after the event #HereThereEverywhere in the arena ended, the noise level below the windows of the editing room suddenly increases again. A huge crowd of people is walking toward the food halls. They are in a good mood - but what are they shouting? “Grü-ne Rou-te!” (en: “green route”) and they are clapping in time with their shouts. Some members of the editing team look closely at the back of their ICY passes for the first time and see that the green route does not quite fit on the pass. That - and especially what the young people are making of this situation - is worth a story, they think. Therefore, the plans for Sunday are quickly changed: One camera team will go to the green
route, to the involuntary hikers. This could potentially still be talked of years later, so the route needs to make it into the film.

When all of the equipment is stowed back in the cars on Sunday afternoon and everyone is saying goodbye, there is just one part of Ingo’s plan that did not turn out quite as he had hoped: “that is was so stressful after all. Our team had only four minutes where everyone was together at one place - for the group picture, and unfortunately that’s it.” Maybe it will be different at the next IYC. Ingo has no doubts that there will be a next IYC. “You can only hope to still be healthy and fit then”, he jokes. „Just think, if it takes another ten years, I’ll be approaching 60!“ But then he thinks about it himself and comes to the conclusion that he can easily do two more youth conventions.

He has planned a few weeks of work for the cutting for the Blu-ray. “The compilation is interesting for everyone, because no one has seen everything.” And he means that quite literally. He has a total of 20 terabyte of video material. Even when he has finished his work, he will not have seen everything, either. That just wouldn’t be possible. But if his plan succeeds, the film will show the IYC from different perspectives: from the anticipation, for example in Zambia or during the rehearsals, to the excitement behind the scenes of the opening event to the closing service on Sunday.

He still has a few hours of work ahead of him. But the end is in sight: „If the DVD doesn’t take the green route, it should be available in December.“ 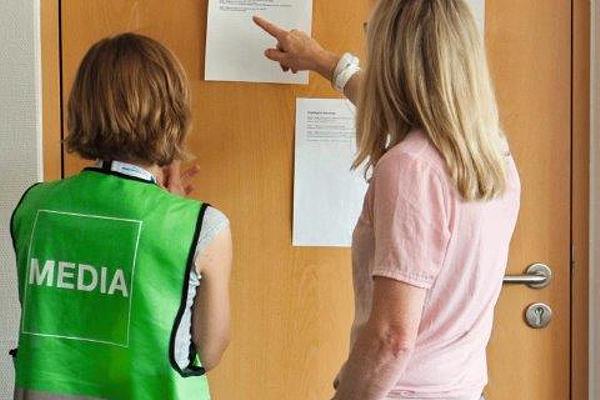 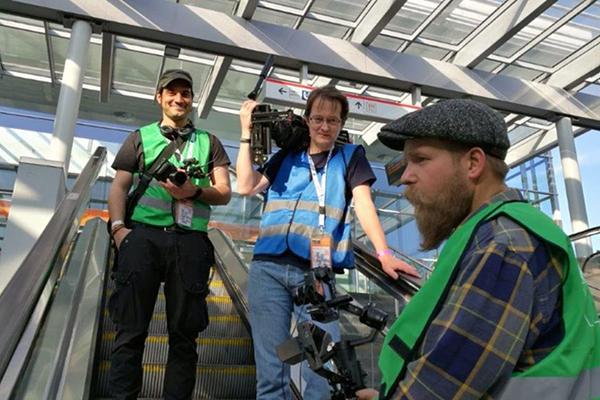 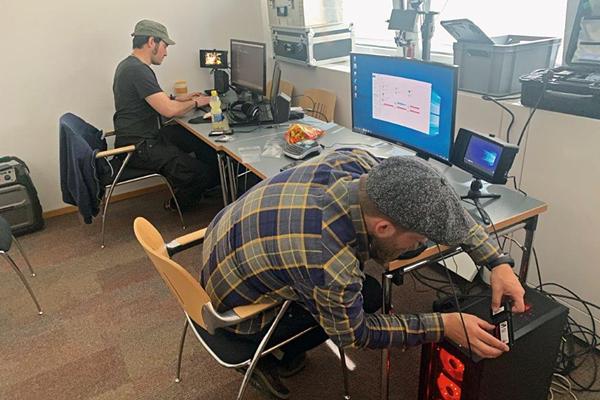 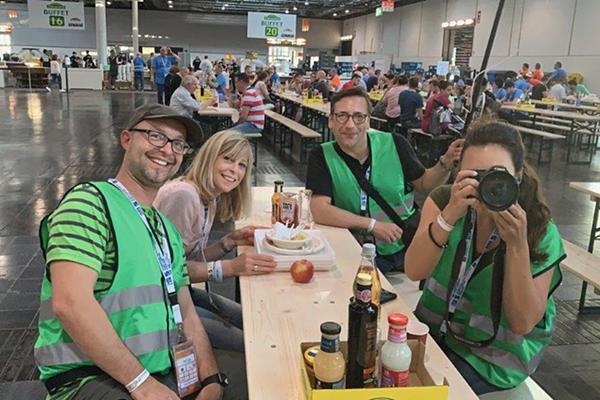 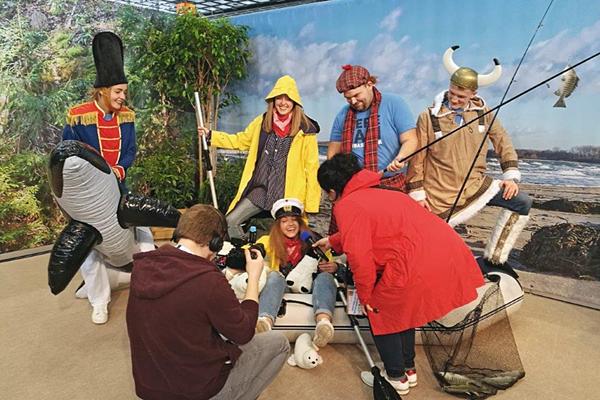 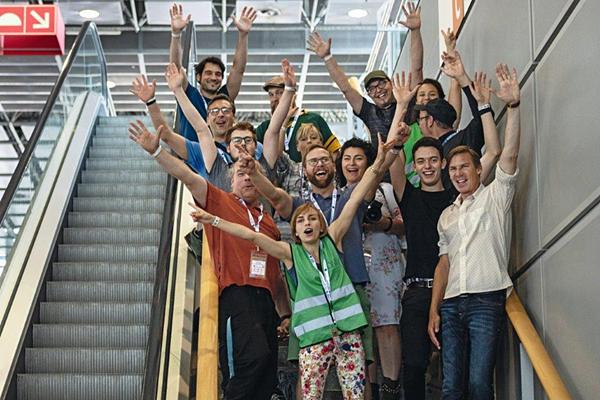