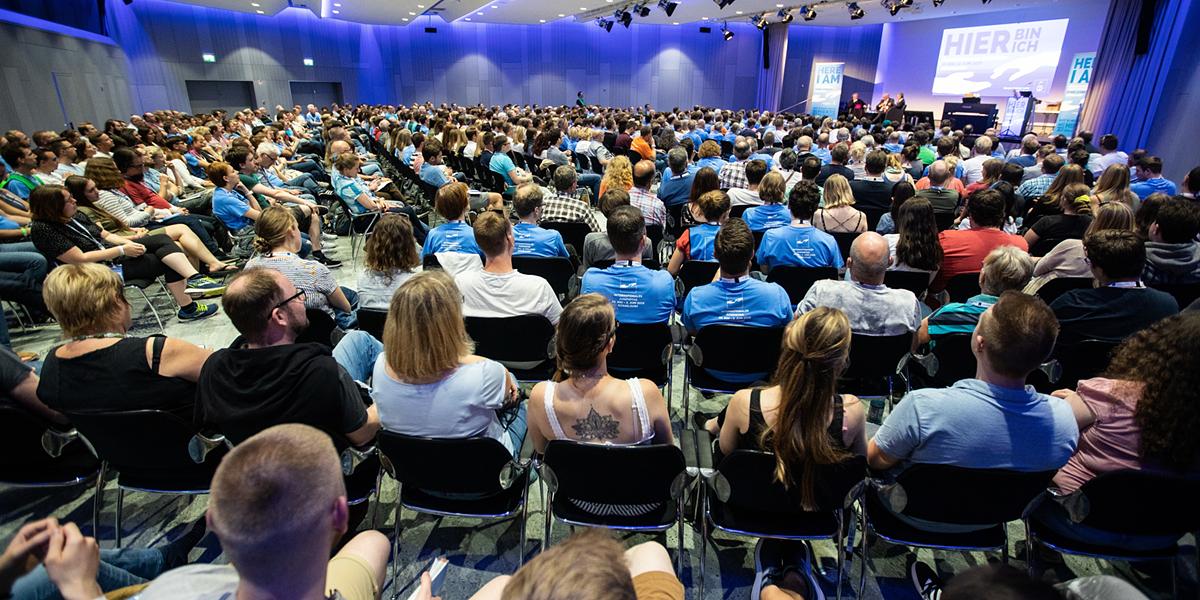 How much Catholic
is in New Apostolic?
An ecumenical conversation

At the beginning of his presentation, bishop Peter Johanning stated that there were quite a number of similarities in the teachings of both churches: They attribute great importance to the empowered ministry, both are world churches and see themselves as especially realised in the context of the Church of Christ. However, there were also many differences, bischop Johanning said. The target of the event was to talk about both. More than 600 participants expressed great interest in this topic.

What distinguishes a Catholic bishop from a New Apostolic bishop?

Bishop Johanning passed the opening of the discussion to apostle Haeck raising the question of how a New Apostolic bishop and a Catholic bishop differ. "Both have completely different powers of ministry", so his answer. Exactly at this point, the understanding of the ministry was clearly different between both churches, so the apostle. According to New Apostolic understanding, with regard to the ministry powers, the Catholic bishopric ministry was identical with the ministry of the apostles in the New Apostolic Church; both ministries had the same functions, said the apostle. These included the tasks of administering the Holy Sealing or the sacrament of Confirmation and the ordination of ministries, the apostle continued. The Bishop in the NAC, on the other hand, helped and worked for the apostle and thus had a certain auxiliary function. He only had the authority to administer the sacraments of Holy Water Baptism and Holy Communion - like every priestly ministry in the NAC, so the apostle.
Suffragan bishop Steinhäuser pointed out that a Catholic bishop would not claim to stand instead of an apostle, but simply sees himself as successor to the apostles. According to Catholic doctrine, the apostle ministry had expired with the death of the last apostles, but the mission of the apostles had not ceased: "In the Catholic Church, the bishops enter into this task", the suffragan bishop said.

Unity of the Church

There is great agreement in the way in which the Catholic and New Apostolic Churches understand each other as world churches: Despite all cultural and social differences in the world, it was important to preserve the unity of the Church. Bishops' conferences and apostles' assemblies were intended to reflect precisely on this, so the unanimous opinion. "The mission of a bishop is not his own profiling, but to serve the unity", suffragan bishop Steinhäuser summed it up. Bishop Peter Johanning added that also in the NAC, apostles and district apostles were committed to the church as a whole.

Where is Church realised in its full meaning?

According to Catholic doctrine, could there still be a church besides and in addition to the Catholic Church, the Catholic clergyman was asked. Bishop Steinhäuser answered diplomatically wise: "I think our self-understanding in both churches is similar in this point". Then he specified that in Catholic comprehension, there was only one church of Jesus Christ, which consisted of all those who were baptised in the name of Jesus Christ. However, the Church in its full meaning would be realised only where a sacramental ministry existed, where the Word of God was proclaimed, and where the sacraments were administered and received. According to Catholic doctrine, it was important that all this was done in association with the bishops and the Pope, said bishop Steinhäuser.

All these remarks could New Apostolic Christians really make thinking that this catholic organisational structure was similar to that of the Chief Apostle and the Apostles, the suffragan bishop admitted. And indeed, he continued, the basic construction was a similar one. Just as the Chief Apostle stood for Apostle Peter, so, in Catholic faith consciousness, also the Pope stood as successor of the Apostle Peter. Steinhäuser's summary: There was still potential to grow closer together. But when comparing the two catechisms, essential similarities could be found. One would discover much more unifying things than one might have expected.

Why no joint celebration of the Holy Communion?

With so much in common, naturally the question arised why a joint Eucharist celebration could not be possible. This was asked to the suffragan bishop and he answered: "Holy Communion is not a means of finding unity, but an expression of found unity". According to Catholic understanding, the doctrine of the Eucharist or rather the Holy Communion would certainly not be identical, but had many overlaps in both churches, he continued. As examples he cited the real presence, namely the actual presence of Jesus Christ in the gifts of bread and wine, or the necessary consecration of the gifts by ministers of the church. Thus, this would not be the problem. But from the view of the Catholic doctrine, the problem was the question, how the New Apostolic ministers were authorised in order to administer sacraments. Apostolic succession was important, and this was also confirmed in the new apostolic catechism. But for the Catholic Church it still was very difficult to grant this to the New Apostolic Church. "There is still a need for discussion", auxiliary bishop Steinhäuser said.

Apostle Haeck explained that the New Apostolic Church offered the possibility of a guest participation in the Holy Communion. Attending divine services, such as confirmation or baptismal divine services, all rite baptized persons were invited to participate in the Holy Communion. Bishop Johanning, with a smile on his face, made a request to his Catholic colleague: "Perhaps one day in one of the next Bishops' Conferences you will be able to promote the concept of "hospitable intercommunion" - and he was surprised by himself about this newly born phrase. 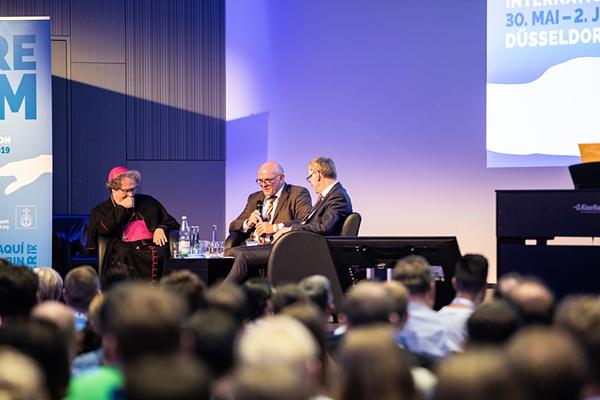 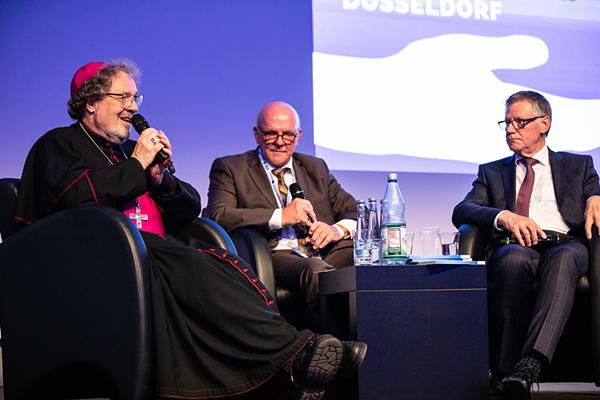 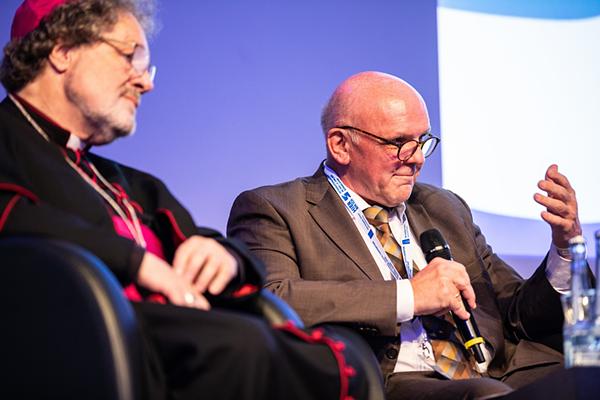 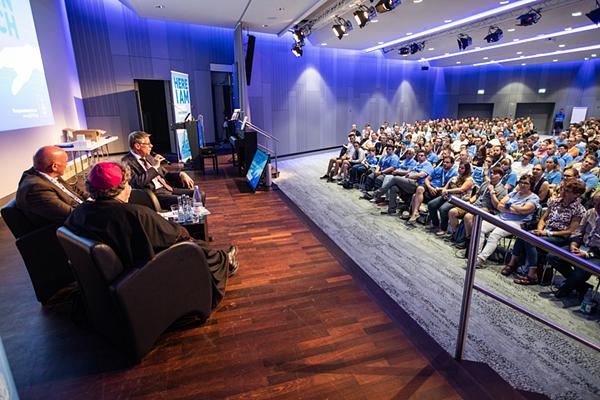 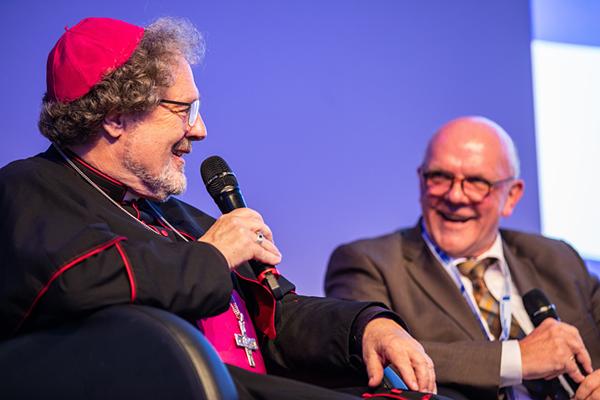 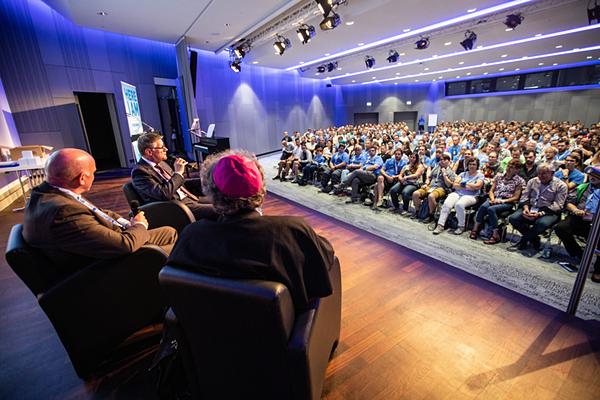 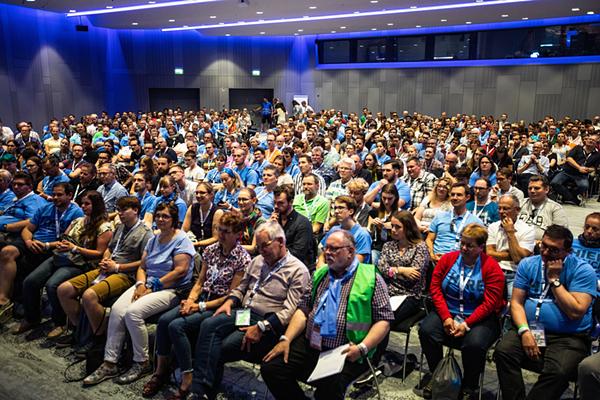 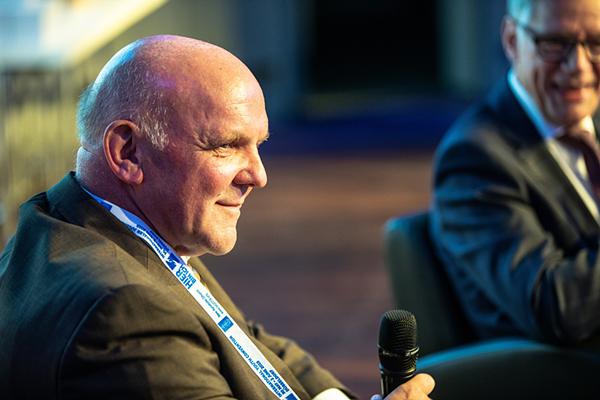 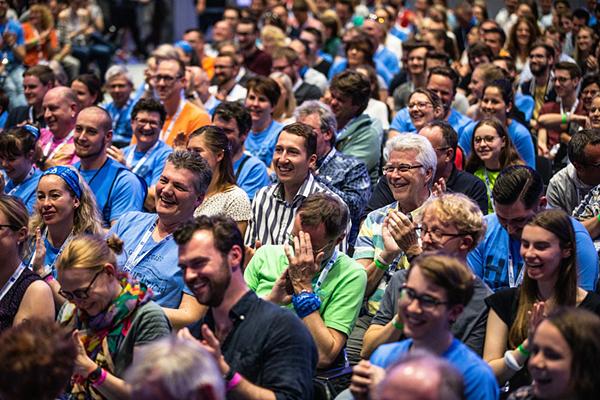 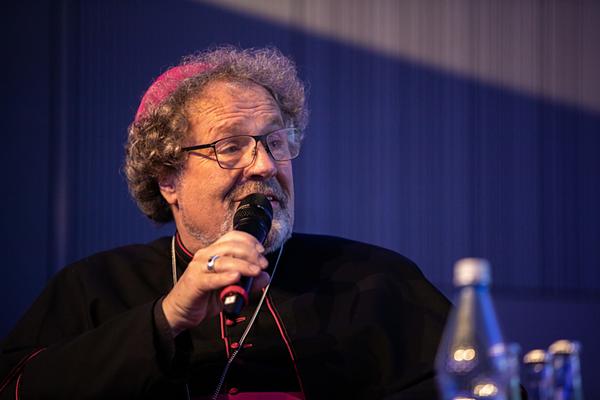 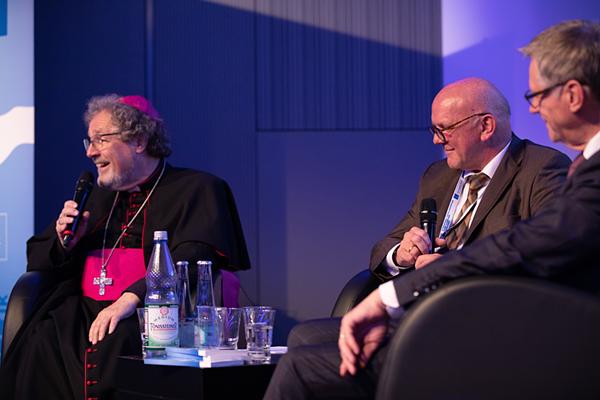 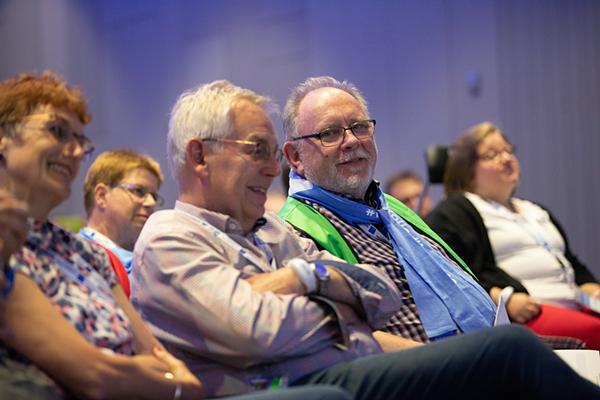 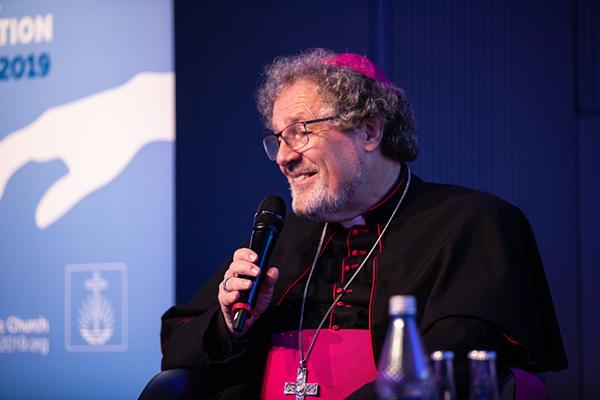 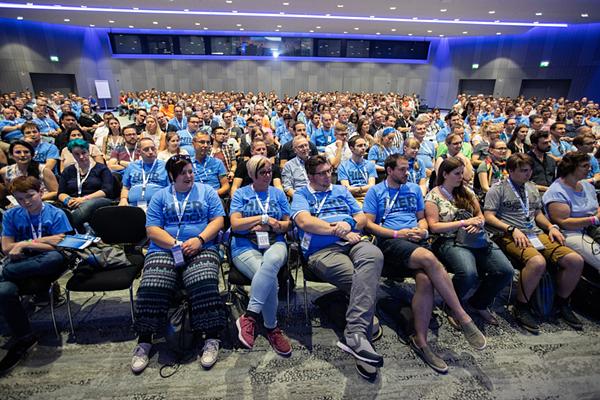 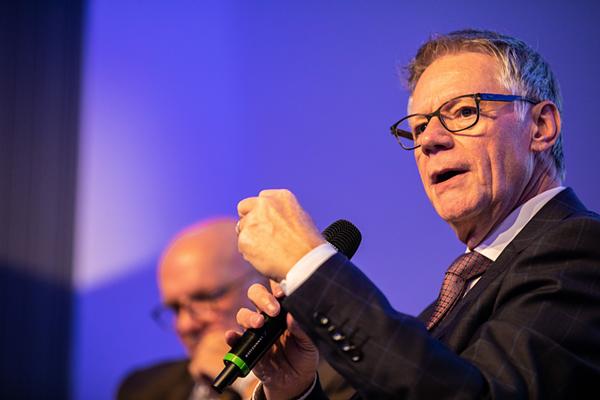 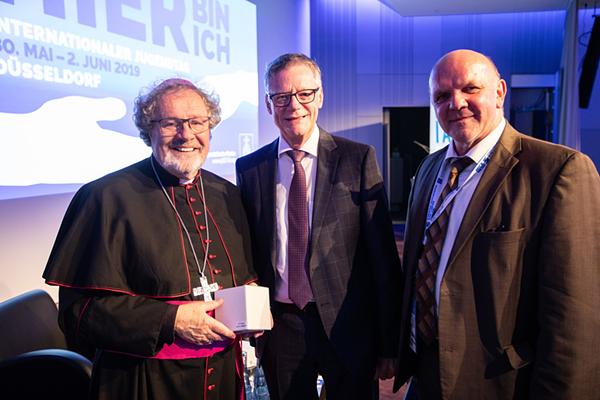 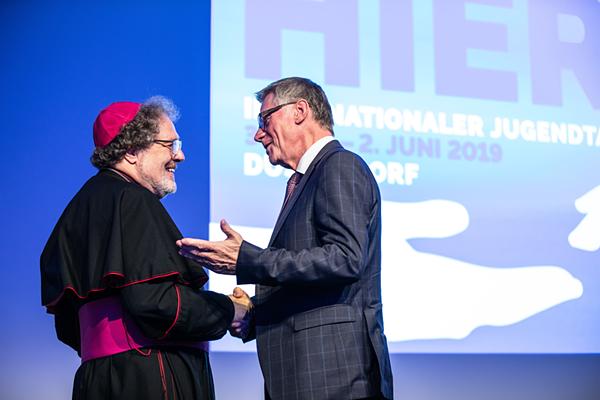 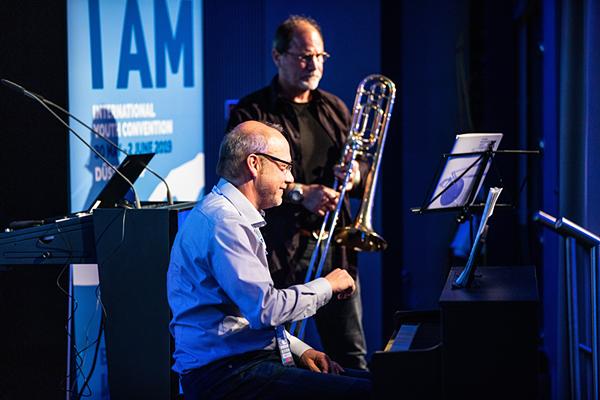