The choreography
for the opening, or:
Dance your faith

It’s going to be spectacular, but nevertheless in a worthy setting: the opening ceremony of the International Youth Convention on Friday is meant to draw the youth from so many different countries and cultures together. The motto “Here I am” will run like a silver thread through the programme – also in the dance sequences. 35 dancers have been rehearsing together for months for their part in the show; dancers, who never previously stood on a performing stage. Nicole Prestle , of the IYC editorial team, spoke with the choreographer, Ekaterina Levy, about this most unusual project.

Frau Levy, you are a dancer and actress and you have attended the international film school in Cologne and took part recently in the ProSieben casting show “Masters of Dance”. How did you come to be involved with the International Youth Convention of the New Apostolic Church?

Ekaterina Levy: I’m personally not New Apostolic, but a friend of mine is – Julian Stumpp. He studied in Cologne with me and he asked me if I would be interested in taking on the work, because of the experience I already had as a dancer. I thought the idea was really cool and so I agreed.

You are used to working with professionals. How did you find the dancers for the IYC?

Ekaterina Levy: Julian and I asked around and announcements were advertising for dancers. I didn’t only want them to be professionals, but rather hobby dancers who could be trained together to a certain level. It was important for me that they would enjoy the role. We are now a group of 35, who have come from different standards and various backgrounds. They are New Apostolic youth, some of whom are still in school, are students or already have a job.

How easy was it then to bring all these young people together to the rehearsals?

Ekaterina Levy: We started in November with the first rehearsal and we have just had a general rehearsal last weekend; the first one where everyone was actually there. There is always one or the other who is missing in such a large group, but we were at least fully complete for once. At the end we will scrutinise each dancer, and when I feel that someone isn’t sure then I might have to say that they won’t be at the opening performance.

The dancers will be appearing before an audience of 40,000. I could imagine that they would be quite nervous.

Ekaterina Levy: I am also keyed up to see what happens when the group makes their appearance – and then with a live band. Our rehearsals have generally been to music from the band. Their composure is most important, of course, in such a situation, and I have already told them how they must react when something doesn’t quite go right. That can always happen, but the choreography has been arranged to suit the dancers. I waited until I saw what the group was capable of.

Aside from the dancers’ capability, where there any particular requirements which you had to meet regarding the choreography?

Ekaterina Levy: No; I was given a completely free hand. I just had two songs which I had to choreo. One is the official IYC song, apart from that I was able to work independently.

What did your choreography focus on?

Ekaterina Levy: I tried to arrange the dancing around the text, to try and express the emotions it arouses. Music always has a strong connection with emotion. The dance movements also had to be powerful, so that they could be clearly seen by all the audience in the Arena. We have tried to diversify the styles of the routines, for each person in the audience to feel that they are addressed.

How did the rehearsals go? Was it difficult to bring 35 young people together who, to some degree, had never taken part in such a project before?

Ekaterina Levy: Certainly, working together with others in such a project was a new experience for everyone. They had to find out how they would react in working as a group, and also in the breaks in between. Some of them just stood around at the beginning, and simply waited until they started again. They could have used the time in between to go over their own dance routines. Others thought that they could learn the choreography from watching videos, but that clearly wouldn’t have been possible.

What would have been so difficult about doing that?

Ekaterina Levy: You can probably learn the individual parts of the routine from a video, but it would be difficult to put it together in the choreography for a group of 35 persons. In one part of the show rehearsal we had spent a couple of hours just running, until the zipper transition correctly slotted into place, and as I already said, we hadn’t had one single rehearsal where all the dancers had attended together.

Are you worried that something could go wrong on the day?

Ekaterina Levy (laughing): No, I’m not worried. The group was at least once complete and we will have one more general rehearsal in the Arena, where all the dancers will again be there. It could be seen how well the group has grown together over the months. All this gives me confidence and I am really happy to know that it will soon go live.

Ekaterina Levy is 26 and comes from Switzerland, but lives since two and a half years ago in Germany. She completed her studies in the International Film School in Cologne, was previously in the discipline of rhythmic sport gymnastics and currently works as a dancer 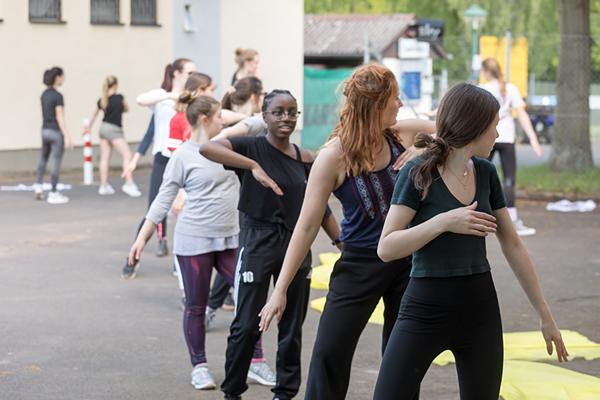 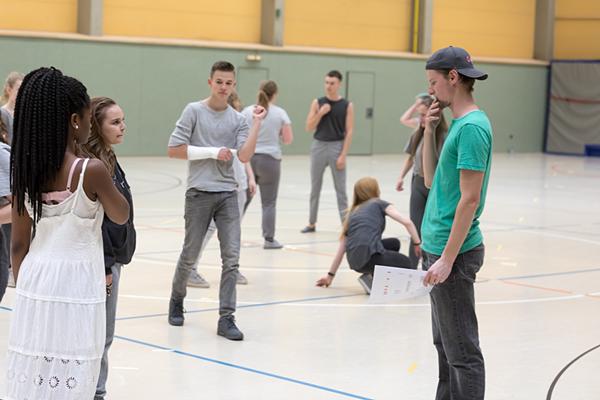 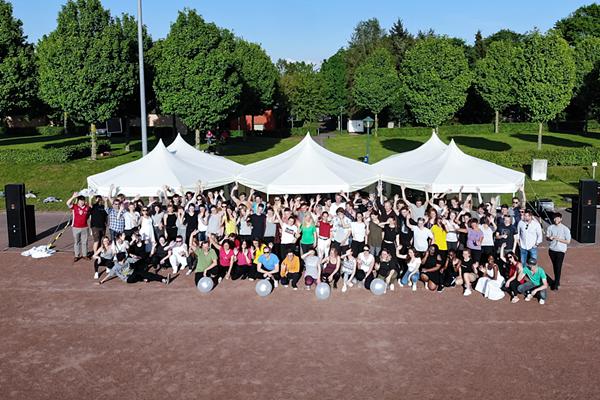