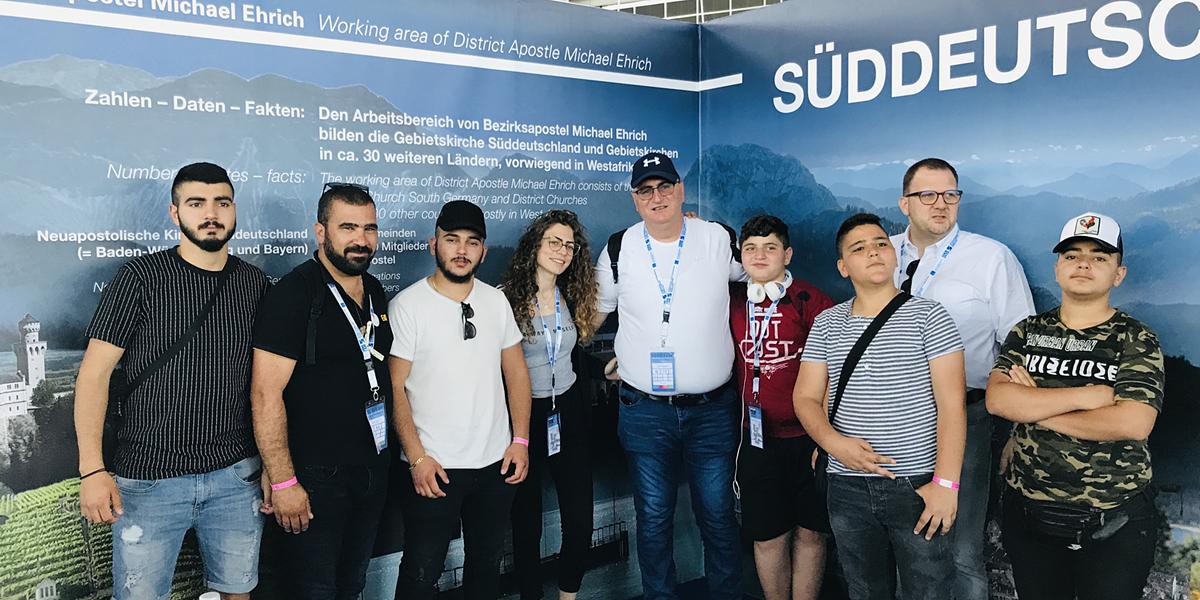 Youth from Israel
in Düsseldorf
The inverted pilgrimage

Seventy-five percent of the population in Israel are Jewish, 17 percent are Muslim. Only around two percent are Christian and of these Christians in Israel, the roughly 100 New Apostolic Christians are a small minority. There are seven congregations in Israel. Especially on holidays such as Easter or Christmas, when churches in Germany are particularly full, the divine services are less frequented in Israel. “The New Apostolic Church is not an officially recognised church in Israel”, says Bishop Jörg Vester, who cares for the brothers and sisters there. „As a result, our members go to their traditional churches on holidays, for example to the Greek Orthodox Church or the Catholic Church.“

Sunday is a normal weekday

In Israel, New Apostolic divine services take place on Friday night, Saturday or Sunday, depending on the congregation. The holy day of the Jews is Sabbath, from sundown on Friday night to sundown on Saturday. Sunday is a normal weekday for them. For the Muslims, the Friday prayer is the highlight of the week. Therefore, there is no free day defined by the state where shops must close at specific times in Israel.

„Our members work for Muslims, Jews or Arabic Christians and therefore all have different working times“, says Bischof Vester. Finding a date for special divine services or youth meetings is difficult. As a result, the 25 youth in Israel, a country only slightly larger than Wales, almost never have a chance to meet - that made their visit to the International Youth Convention (IYC) a very special experience for them.

From Israel to Düsseldorf

Anan, Khleel, Jozef, Seham, Fade, Rebea and Sally – the seven young people travelled to Düsseldorf with their priests Kamel Mozalbat and Tarek Jabour. They are from the north of Israel - one from Haifa and six from Eilaboun and Maghar in Galilee, around 25 minutes from Nazareth by car. During the IYC, they share their experiences and impressions with the editors of spirit:

What where your expectations?

Seham: My father was at the International Church Convention (ICC) in Munich in 2014. He talked about it a lot and I was looking forward to experiencing the size and strength of the New Apostolic Church myself!

Jozef: I can’t believe that all the people here are really New Apostolic.

Fade: Furthermore: Germany is a beautiful country. Just being here is already a great experience!

What inspires you here, what are you happy about?

Khleel: The atmosphere! It is great, as are most of the activities. Last night, thousands of young people were together at the IYC disco night and everyone danced peacefully. I had the feeling that people have come together here who really live according to the Christian values in their everyday life.

Priest Jabour: I was inspired by the encounters with believers from so many different countries. When we met people with the IYC wristband in the old city of Düsseldorf, we instantly started up a nice conversation. They came from Berlin, from Australia ...

Priest Mozalbat: And of course we enjoy the divine services in such a great fellowship and also praying together!

Priest Jabour: Everyone here has the same faith, the same love, through Jesus we are all one, no matter where in the world we live. We all have the same goal. We are all united in the love of God.

Priest Mozalbat: I am very much looking forward to the divine service with our Chief Apostle on Sunday. To see him live is a great highlight.

Fade: Many were praying in their groups before the meals. That was a new experience for me.

There is hummus on the IYC – this chickpea mash is one of Israel’s national dishes. Now, be honest: How do you like it?

Khleel: But not as good as in Israel!