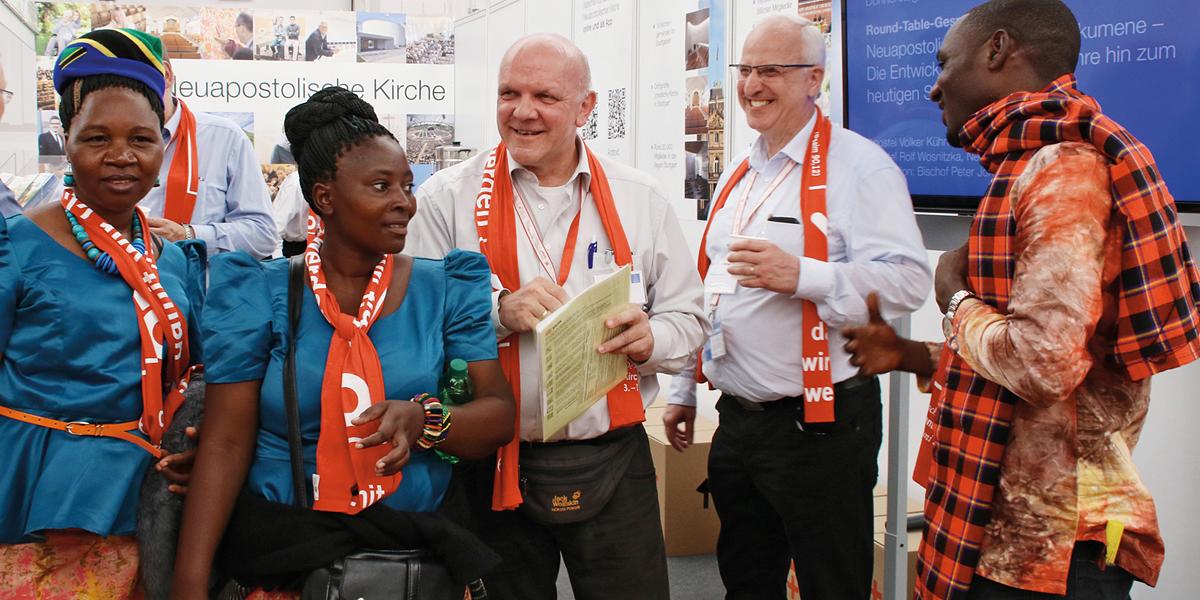 Here we are:
ecumenical Christianity at the IYC

The “Arbeitsgruppe Kontakte zu Konfessionen und Religionen, AG KKR, (Working Group for contact to confessions and religions) presents itself at the International Youth Convention with a number of presentations, workshops and podium discussions on various themes. The IYC journalists enquired of Apostle Volker Kühnle and Bishop Peter Johanning what was behind their programme.

At first glance it isn’t apparent that the events on the ecumenical programme all have a connection with ecumenism. For example, what do conspiracy theories (on 1st June, at 11 a.m. in CCD-Süd) or nutrition (also on 1st June at 1:30 p.m. in Hall 8a) have to do with the subject?

Bishop Johanning: The speakers are the connection to our working group. The names of Dr. Andreas Fincke and Dr. Kai Finkschmidt are well known to us for some years. I asked them some time ago if they could imagine taking an active part at the IYC. They would have come anyway, but I wanted to actively include them in the programme. The presentations which they have prepared will certainly be intriguing to follow. They are both experts in this field and have already publicised much of their work.

What expectations await these external speakers in Düsseldorf? Who are they and what affiliation do they have to the New Apostolic Church?

Bishop Johanning: Dr. Kai Finkschmidt is a lecturer at the “Evangelischen Zentralstelle für Weltanschauungsfragen”, EZW, (Central Protestant authority on ideological issues) in Berlin. The EZW writes on issues of movement, changes and relationships in/to churches, confessional communities and ideology. It is also therefore an observer of the New Apostolic Church.

Dr. Andreas Fincke is currently a pastor to students and head of the Erfurt Evangelischen Stadtakademie (City of Erfurt Protestant Academy). He was also formerly a lecturer at the EZW. His work includes essays on the New Apostolic Church and he is recognised for his knowledge of the apostolic doctrine. As a university pastor he is ideally suited to lecture in front of young people.

In dialogue with others

Common aspects between the Catholic Church and the New Apostolic Church will be discussed with the auxiliary Bishop Rolf Steinhäuser (on 31st May, at 3 p.m. in CCD-Süd). Will the position of the Protestant Church come into the discussion?

Bishop Johanning: No; not really. Bishop Steinhäuser is a member of the Ecumenical Commission in the Bishops’ conference of the Catholic Church in Germany. From that position, fundamental ecumenical aspects will naturally be a part of the dialogue. Apostle Clément Haeck, of the NAC Western Germany, will also be on the podium. He will discuss the New Apostolic view of relevant questions.

What will the aim be of the podium discussion with church converts? (on 1st June, at 1 p.m., in CCD-Süd)

Bishop Johanning: The situation can become tense, and sometimes difficult, when someone converts from one church to another. We want to find out how Christians feel who have changed their confession from the one in which they were baptised, so that we can also learn from this. Christians from the Protestant, Catholic or other churches often enter our Church with the wish to become New Apostolic Christians. The situation apples equally the other way round. Members of the New Apostolic Church also often change to other confessions. How does it happen and why does it happen? These are the questions we would like to answer.

The relevance and clarity of preaching is currently a subject within many confessions. Is our Church in dialogue with others, and for whom is the workshop “The preacher looking at the peoples’ mouths” primarily intended – for the preacher or the listener? (on 1st June, at 9:30 a.m., in Hall 7.1)

Apostle Kühnle: For both! From many discussions, also with our ecumenical partners, we know that many theological definitions and biblical stories are not so well known today. The preacher who doesn’t realise this can hardly wonder when his sermon isn’t understood by the recipients and its content is put into question. The same goes for the so-called New Apostolicisms; meaning the terms used which are known to us, the older generation, but which are hardly understood by the younger generation of today. The aim of the workshop is to identify and interpret the theological and typical New Apostolic terms which are difficult to understand – without losing their context. When we can find the words which fit in today’s language we will certainly have served both sides – for the preacher and the listener.

Is the podium discussion “Christianity and Islam” (on 1st June, at 5 p.m., in CCD-Süd) only to do with theological aspects, or will it also include inter-relationships in faith (for instance, inter-religious marriages)? Will future inter-religious dialogue become more in focus in the AG KKR?

Apostle Kühnle: Giving sufficient consideration to the theological aspects would go far beyond the scope of any podium discussion. We are talking more about the practical questions of living in peace with each other. The aim of this podium discussion is to highlight the different theological convictions and to demonstrate ways of resolving them.

Inter-religious dialogue is essential in our increasingly multi-religious society, and this must also include the growing ideological groups.