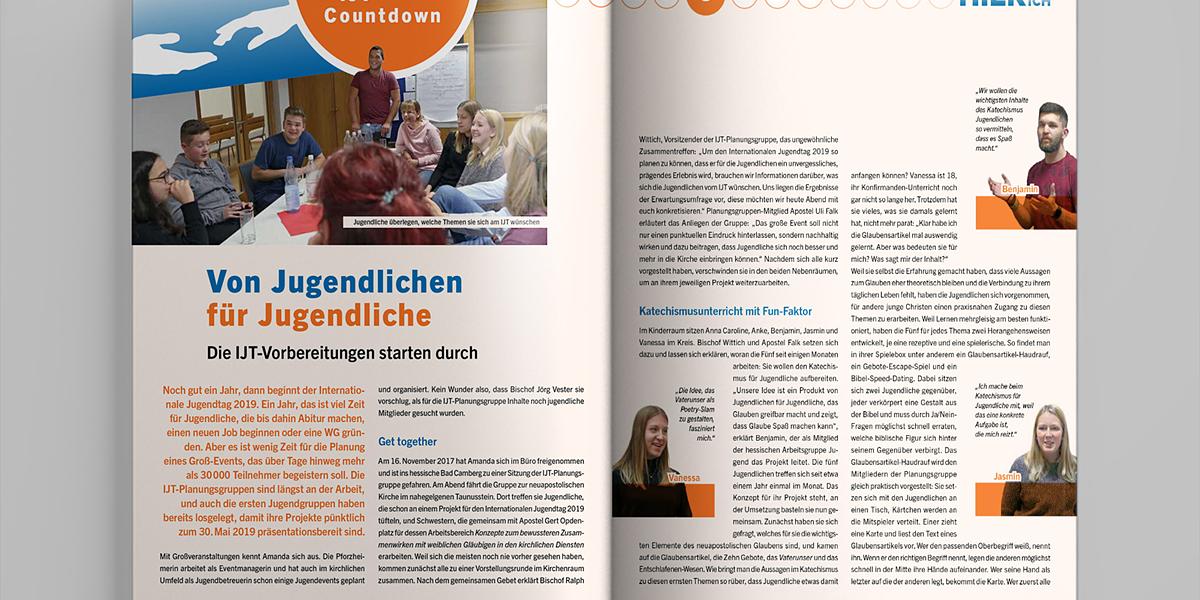 Just one year to go until the International Youth Convention 2019 begins. One year – perhaps that might still seem a long way away for the youth, for those who are studying in that time toward their final school exams, starting a new job or moving into shared accommodation. The time is very short, however, for the planners of this major event; an occasion which is intended to bring lots of joy throughout to more than 30,000 participants. The IYC planning groups have already been busy some time and the first youth groups have begun with their projects, so that they can present them on time for the 30th May 2019.

Amanda is one person who is quite familiar with large events. The young lady from Pforzheim, in Germany, works as an event manager and, also as a youth delegate, has been involved with planning and organising many events for the youth on behalf of the church. It wasn’t surprising, therefore, that Bishop Jörg Vester suggested her name as the IYC planning group responsible for programme contents were on the lookout for young assistance.

Amanda took leave from her office on 16th November 2017 to join a meeting of the IYC planning group in the Hessian town of Bad Camberg. That evening the group visited the New Apostolic Church in the nearby town of Taunsstein. They met there not only a group of the youth who were drafting a project which they wanted to complete for the IYC 2019, but also a number of sisters who, together with Apostle Gert Opdenplatz, were working on a concept of female believers partaking in religious duties within the Apostle’s district. Because most of the group had not previously met, the meeting was arranged to provide an introduction. After praying together, Bishop Ralph Wittich, head of the IYC planning group, explained the reason for the unusual meeting. “We want to plan the International Youth Convention 2019 so that it leaves an unforgettable, deep impression behind and we need information about what the youth wish for from the IYC. We have the results from the expectations survey and we would like to follow them up with you here this evening.”

Apostle Uli Falk, a member of the planning group, continued with the group’s objective, “This great event shouldn’t just leave a brief impression behind, but linger with the youth and give the impulse for the youth to be closer and more involved in the church.” Following brief introductions by all they moved to the two adjacent rooms to further discuss their respective projects. .

Catechism lessons with a degree of fun

The five youngsters Anna Caroline, Anke, Benjamin, Jasmin and Vanessa are sitting together in a circle in the room with Bishop Wittlich and Apostle Falk in their midst, who listen as the five speak about what they have been doing for the past several months. They want to take a fresh look at the catechism. “Our idea is to have a product by the youth for the youth”, said Benjamin, who is a member of the Hessian working group “Youth” and is leading the project. The five have been getting together once a month over the past year. They have defined the concept of their project and now they are working together on how to put into action. They firstly asked the question, what are the most important elements of the New Apostolic faith? and came up with the answer the Creed, the Ten Commandments, the Lord’s Prayer and life after death. How can the doctrine in the catechism on these serious issues be presented so that the youth can more easily understand them?

Vanessa is 18. Her Confirmation lessons aren’t so far behind her. Even so, she can’t remember all the things that she learnt then. “Sure, I learnt the articles of the Creed by heart, but what do they mean for me? What do the statements tell me?” Because they have come to realise that many statements about their faith are more theoretical than practical in their everyday life, the youth have decided to try to adapt a more practical approach on these issues for other young Christians. Learning through different methods of approach works best and so the five decided on two of them; one receptive and the other as a game. Amongst the items in their “box of games” was a “hands on” articles of faith, a Commandments “escape” game and a Bible speed-dating quiz. This called for two players to sit opposite each other, each representing a biblical figure and they had to answer questions with “yes” or “no” to their opponent about what character they represented as quickly as possible.

A practical demonstration of the “hands on” articles of faith was given to the planning group members on the spot. They sat with the youngsters at the table and playing cards were dealt out to the players. One of the players drew a card and read out the text of one of the articles of faith. Whoever recognised the generic term first named it and if his answer was correct, the others laid their hands, as quickly as possible, on top of each other, in the middle of the table. Whoever’s hand was last was given the card. The one who got rid of his cards first was the winner. What appeared to be just a pleasant pastime worked exceptionally well. After a few rounds the long forgotten articles of faith were restored again to memory.

Enough of playing: now to put it into action. The youth have so designed the game that anyone who is interested could print it out for themselves or play it through a cost-free app, where the rules of the game would be in a video. They are looking for professional help for the design of the box of games and the video and also for someone to prove the theological content of the games. Also, it should all be translated into other languages – the “I” of the IYC shouldn’t just be on paper. The planning group members were very impressed by their motivation and innovation and promised to help them. They also need some help for their second idea: the Lord’s Prayer as a poetry slam. One of the youth is thinking about the meaning of the text in the Lord’s Prayer, hearing it from different angles. One of the group reads the text out, another comments on it from the viewpoint of the New Apostolic doctrine and a third member from the perspective of the youth.

This project is of special interest to the youth. “I’m not the type for poetry slams,” said Vanessa, “but when Benni asked me if I would take part in a poetry slam about our faith, I thought it was a great idea; that was something new.” Anke and Jasmin were also keen to give fresh thoughts about the statements of their faith. One thing the project planners wanted to know from the five youngsters: what had motivated them to start this labour-intensive project? “I’m doing it because Benni had invited me personally,” said Jasmin. As Vanessa continued, “It wouldn’t have appealed to me if I had seen it in a website or from a flyer. I’m taking part because I find this particular project very interesting.” The church ministers were able to take this information with them for further planning of the IYC; that the youth didn’t really feel attracted by prompts anonymously received, but would more likely be enthusiastic if they came from their friends or youth delegates.

Women in the spotlight

Sisters and ministers also sit together in a circle in the sacristy. Amanda is standing at a flip chart and is making notes of the subjects which the project group “Women” would like to see at the IYC 2019. “In the planning group we have been giving some thought about the topics which interest the youth in the New Apostolic Church but which aren’t so present, which is why we are here with you now. You have been working on the role of women in the congregations and we could certainly learn from that,” Amanda explained to the group.

They didn’t want to discuss the role of women in the ministry, as everyone agreed. “That is an issue for the Chief Apostle and the District Apostles at the appropriate time,” said Apostle Opdenplatz. There are, however, many other ways for women to be involved in working with the church which aren’t perhaps being used in all the districts and congregations. The members of both working groups were in accord; that the spotlight should be focussed on activities which young women could do in the church.

What do you want?

The project group would have continued for some time in gathering more ideas, had they not been suddenly disturbed by loud noises and disorder in the passage. Young people burst into the foyer, passing large crates with cutlery and crockery, with fruit and food warming boxes. Now it was time for an evening meal together with the youth from the congregations of Taunusstein and Bad Schwalbach. The discussions then continued around the long table between antipasti, lasagne and apple juice about the subject which Bishop Wittich had mentioned at the beginning. The youth talked about what they hoped for at the International Youth Convention 2019; what items they would like to see and by what communication means they would like to be kept informed. Information at best by WhatsApp; devotionals, concerts and quiet zones to chill out were all mentioned and also discussions about other forms of divine services, living together with partners of other religious confessions, associating with homosexuals and new ideas for working with the youth. The project group members also learned that the youth would prefer to make spontaneous decisions at short notice for events. They weren’t really so interested in long term planning.

As Amanda said, “I have the feeling that the IYC isn’t fully with the youth yet. For them, 2019 is still a long way away.” High time to change that, was the opinion of the group in Taunusstein. That needs people with lots of enthusiasm, to kindle the fire in the youth, like Hannes, the youth delegate in Taunusstein’s congregation. “I was at the EYD in 2009 and it was such a great occasion. I will do all that I can so that ‘my’ youth can also experience the same in 2019. I wish that they can all come,” he said. There was no doubt that he would manage that. The work is now intensively underway to ensure that the experience will be so great as is being promised. 2019 is coming at a rapid tempo – those who want to be actively involved and be there shouldn’t wait too long.

The magazine “Spirit” has been publishing news and facts about the International Youth Convention since March 2017 under the heading “IYC Countdown. This the fifth article in a series of 12 planned. 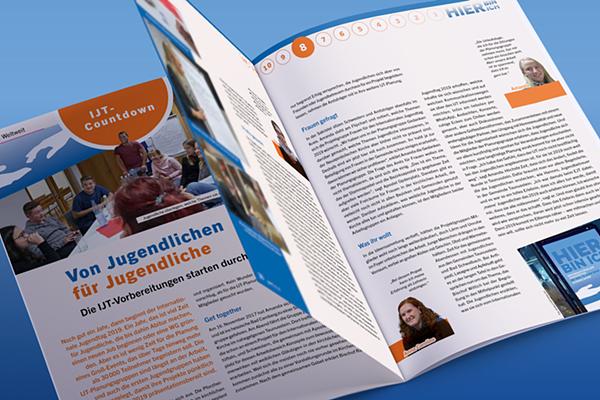 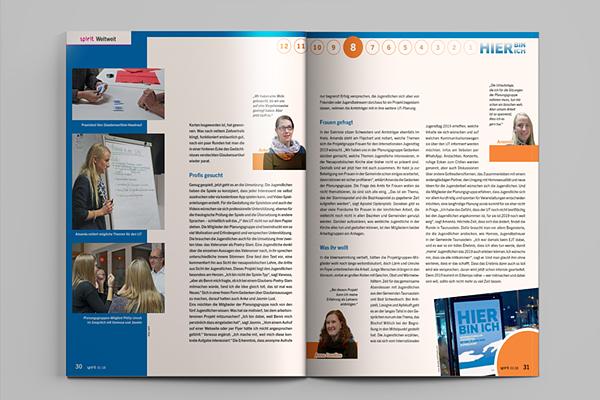 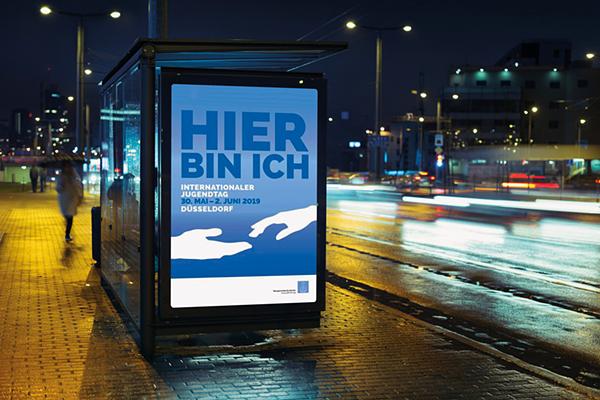